When John Howe Peyton moved to Staunton, Virginia from Stafford County, Virginia during the summer of 1809, his line of the Peyton family had been in Virginia for over a century and a half, first in Westmoreland County and then in Stafford County.

John Peyton, grandfather of John Howe Peyton, was born in 1691 in Stafford County, Virginia. During his lifetime, he was a magistrate for his county and a representative of Stafford County in the House of Burgesses. John Peyton was a vestryman, serving first in Quantico Parish, and later at Overwharton Parish. He was on the first vestry of the present Aquia Episcopal Church in Stafford County, newly rebuilt in 1757, and his name appears there on a plaque commemorating this first vestry. Aquia Church was built on land that was likely a former part of Stony Hill plantation. John Peyton owned a great deal of land, both inherited and purchased by him. At the time of his death, he owned property in Alexandria, Fauquier County, Stafford County, and Prince William County. John Peyton married first, Ann (Waye) Young, a widow. They had Valentine, Ann Waye, Yelverton, and Henry. Ann (Waye) Young Peyton died,and in 1751 John Peyton married Elizabeth (Rowzee) Waller. She was born in Essex County, Virginia, was the widow of Charles Waller, and had children from that marriage. John Peyton and Elizabeth (Rowzee) Waller had John Rowzee Peyton and Valentine Peyton. John Peyton died on May 18, 1760 at Stony Hill. At the time of his death, he owned two plantations, Tusculum, on the Potomac, and Stony Hill on Aquia Creek. After the death of her husband, Elizabeth (Rowzee) Waller Peyton married Benjamin Strother, who had served on the first vestry of the newly rebuilt Aquia Church in 1757 with John Peyton. Stafford County was occupied by Union troops during the Civil War. During the winter of 1862-1863, Union troops were encamped at Stony Hill and Stony Hill was destroyed during this occupation. In 1936, Robert Eden Peyton, Harry Peyton, and Lawrence Washington Howe Peyton, all descendants of John Peyton of Stony Hill, had the remains of John Peyton, his two wives, and the first wife of his grandson removed from Stony Hill and reinterred in the churchyard at Aquia Episcopal Church. In 1952, they founded the John Peyton Memorial Association which later became the Peyton Society of Virginia in 1971.

John Howe Peyton, eminent lawyer and statesman, was born at Stony Hill in April, 1778, the son of John Rowzee Peyton and of the fifth generation in his Peyton family line in Virginia. After completing his education at the College of New Jersey at Princeton, Peyton soon began the practice of law. In 1802, he married Susan Smith Madison, a daughter of William Strother Madison and Elizabeth Preston and they had one son, William Madison Peyton. John Howe Peyton moved to Staunton, Virginia in the summer of 1809. Peyton was a major and on the staff of General Robert Porterfied during the War of 1812. Susan Smith Madison Peyton died in 1820. In 1821, John Howe Peyton married her cousin, Ann Montgomery Lewis. When Ann Montgomery Lewis Peyton moved to Staunton, it was a homecoming of sorts for her. Her maternal grandfather, Col. William Preston, had early ties to Augusta County and was a representative of Augusta County in the House of Burgesses. Her paternal great-grandfather, John Lewis, was the first settler of the area and known as the Founder of Augusta County and Staunton. An additional connection for her was living in the stone house in Staunton, then owned by her husband, that was formerly the property of her Lewis relatives. In 1824 following the completion of a new residence, John Howe Peyton moved to the property in Augusta County that he named Montgomery Hall as a tribute to his young wife. Between 1822 and 1843, John Howe Peyton and Ann Montgomery Lewis had ten children: Susan Madison, John Lewis, Anne Eugenia, Mary Preston, Lucy Garnett, Elizabeth Trent, Margaret Lynn, Yelverton Howe, Virginia Frances, and Cornelia Bernard. Of John Howe Peyton’s eleven children, five eventually settled in Staunton after they were married: Susan Madison Peyton married John Brown Baldwin, John Lewis Peyton married Eliza Clark Washington, Lucy Garnett Peyton married John Newton Hendren, Margaret Lynn Peyton married George Moffett Cochran, and Cornelia Bernard Peyton married William Hastings Greene. After the second marriage and removal to New York of his brother, Rowzee, John Howe Peyton built a cottage on his property for his widowed mother, Anne Hooe Peyton, and brought her from Stony Hill to live at Montgomery Hall. She died there on January 1, 1837.

John Lewis Peyton, son of John Howe Peyton, was born at Montgomery Hall on September 15, 1824. He attended Virginia Military Institute in 1840 and 1841 and was graduated from the University of Virginia in 1844. He practiced law for a short time and was married Eliza Clark Washington, a daughter of John Cobb Washington and Mary Ann Bond, on December 17, 1855 at Vernon, the plantation of her father in Kinston, Lenoir County, North Carolina. Eliza Clark Washington was descended from the Washington, Herritage, Cobb, Franck, Bond, Cannon, and other families of North Carolina. She was the niece of William Alexander Graham, former Governor of North Carolina. In 1861, John Lewis Peyton was appointed by Henry Toole Clark, then Governor of North Carolina, to go to England as an agent of the State of North Carolina in an effort to gain support for the Confederate cause and break up the northern blockade of southern ports during the Civil War. John Lewis Peyton’s son, Lawrence Washington Howe Peyton, was born in 1872 in St Peter Port during his parent’s expatriate sojourn. In 1876, after spending the Civil War years in England and living on Guernsey in the Channel Islands for many years, John Lewis Peyton returned to Staunton with his wife and young son and built Steephill, a Gothic mansion, on ninety acres of farmland. John Lewis Peyton inherited a farm from his father in Alleghany County, Virginia and owned it until 1869. He also owned a farm in Ohio, and over time, several other properties in Augusta County and Staunton. John Lewis Peyton was very content in Staunton, corresponding with his many friends and acquaintances, and was well-known as an historian and was the author of a number of books, including History of Augusta County, Virginia. He died in 1896 and his wife, Eliza Clark Washington Peyton, died in 1907.

Lawrence Washington Howe Peyton, grandson of John Howe Peyton, and the only child of John Lewis Peyton and Eliza Clark Washington, was born in St. Peter Port, Guernsey, the Channel Islands on January 22, 1872. He was graduated from Virginia Military Institute in 1893 where he was a Jackson Hope medalist. He taught for a short time at VMI and was president of VMI’s Board of Visitors for many years. Peyton attended law school at the University of Virginia and Washington & Lee. He was a lawyer in Staunton from 1895 until his death, served during the Spanish-American War, and was the presidential elector representing the Tenth Congressional District in 1920. In 1905, he married Margaret Erskine Catlett, a daughter of Richard Henry Catlett and Fannie Bolling Gay. Margaret Erskine Catlett was born February 27, 1878 and was a descendant of the Catlett, Tutt, Underwood, Pendleton, Clayton, Scott, Bolling, Kennon, Rolfe, Erskine, Estill, Strother, Frogg, Lewis, and other families of Virginia. Lawrence Washington Howe Peyton and his wife, Margaret Erskine Catlett, were both descendants of the Founder, John Lewis, of Augusta County. He was the third great-grandson of the Founder’s son, William Lewis, and she was the fifth great-granddaughter of the Founder’s son, Thomas Lewis. Thomas Lewis surveyed Augusta County and laid out the town of Staunton. Mr. and Mrs. Peyton commissioned the Collins firm to design a house for them which they later built at 305 East Beverley Street in Staunton. Prior to living at Steephill, Lawrence Washington Howe Peyton maintained an orchard business on the property. Mr. and Mrs. Peyton later commissioned Sam Collins to design plans for remodeling Steephill in the Georgian style. Lawrence Washington Howe Peyton later acquired the cottage that his grandfather, John Howe Peyton, had built at Montgomery Hall for Anne Hooe Peyton. He had the cottage dismantled and rebuilt at Steephill. Later, as a momento from her own family, Margaret Erskine Catlett Peyton had the original brass lock from her mother’s family house, Gaymont, in Augusta County near Staunton, installed in the front door of the cottage. At one time, the sundial formerly belonging to John Peyton at Stony Hill was in the garden at Steephill.

Lawrence Washington Howe Peyton died in 1949 and Margaret Erskine Catlett Peyton died in 1958. They had four children: Richard Catlett, John Lewis, II, Lawrence Washington Howe, Jr., who died in 1935, and Betty Washington, none of whom remained in Staunton. The Peyton children sold Steephill in 1962. Steephill was first purchased by the city of Staunton for further increasing the acreage at Gypsy Hill Park. Most of this acreage was retained for the park, but the house and some acreage were later resold as a private residence. 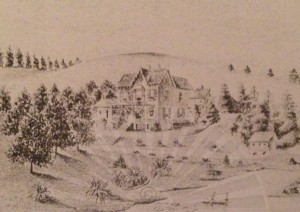