Richard Henry Catlett, born April 6, 1828 in Fauquier County, Virginia, was a son of Robert Catlett and Ann Clayton Tutt. He served as Quartermaster at Virginia Military Institute in Lexington between 1850-1858, was allowed to study law while on duty at VMI, and resigned his position as Treasurer there in 1861 to join the Army of the Confederacy. Catlett was aid to Governor John Letcher in Richmond and served under General John Echols during the War. When the war ended, Captain Catlett formed the law partnership of Echols Bell & Catlett with Henderson M. Bell and John Echols, a firm known for their fine character in legal dealings during the Reconstruction period. Catlett later had lucrative real estate and mining interests, was a member of the Board of Visitors at VMI, and served on the vestry of Trinity Episcopal Church for many years.

Catlett married first, April 16, 1864, Mary Mercer Patton, daughter of William Fairlie Patton, a surgeon in the U. S. Navy and later in the Confederate Navy. They had two surviving sons, Charles, born August 18, 1865, and Richard Henry, Jr., born November 27, 1868. Mary Mercer (Patton) Catlett died September 21, 1871, a little over a month after the birth of their third son, William Fairlie, who survived his mother by only one year.

Catlett married second, May 24, 1876, Fannie Bolling Gay, born in Richmond February 13, 1847, a daughter of Charles Scott Gay and Margaret Lewis Erskine. Fannie Bolling Gay was a descendant of John Rolfe and Pocahontas through her father’s family and a descendant of John Lewis, known as the Founder of Augusta County and Staunton, through her mother’s family. Fannie Gay moved with her parents and siblings to a house and property they called Gaymont, purchased for the family by her grandfather, Henry Erskine. The house was built c. 1808 by John McDowell. The original Dufour “Les Vues d’Italie” wallpaper in the house was removed by Fannie Bolling (Gay) Catlett many years later and stored until it was sold c. 1962 by the estate of Margaret Erskine (Catlett) Peyton to the owner of another house in Virginia known as “Gaymont.” Richard Catlett and Fannie Gay lived in several houses in Staunton. Catlett rented the house formerly owned by Dr. Barnas Sears, owned a house on North New Street, and finally contracted with James Wilson to build a large house on a lot he owned at 303 Berkeley Place in the summer of 1896. William Larner completed the stone work on the house. “Catlett House” remained in the family until 1972.

Richard Catlett and Fannie Gay had six daughters born between 1878 and 1889. Katherine, born in 1880, and Agatha, born in 1889, died in infancy. Margaret Erskine, born in 1878, married Lawrence Washington Howe Peyton, a grandson of John Howe Peyton, at Catlett House in December, 1905. Both were descendants of John Lewis, he through William Lewis, and she through Thomas Lewis. Fanny Gay, born in 1879, married Livingston Waddell Smith, a professor at Washington & Lee University, at 303 Berkeley Place in November, 1908.

Elizabeth Gay Catlett died at 303 Berkeley Place March 2, 1948. In her handwritten will dated October 7, 1946, she provided a $10,000.00 bequest for the benefit of the local African-American community. Her will directed that her sister, Amy, would determine the best use for this gift. The funds were eventually used for the construction of a swimming pool at Montgomery Hall Park, a park created and run by the local African-American community from 1946-1969. Montgomery Hall Park opened on July 4, 1947. 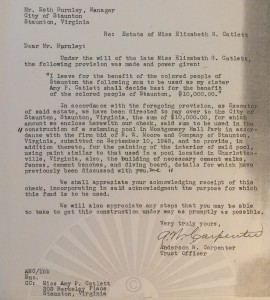 Charles Catlett, a geologist and chemist, may have inspired his sister’s kindness and generosity. Charles Catlett died October 27, 1945 at 309 Vine Street, his house in Staunton. His contributions and philanthropy were already legendary in Staunton at the time of his death and included the donation of his Betsy Bell property to the City and payment by him for the clearing of this property, his efforts in beautifying the City, particularly through the use of dogwood trees in Gypsy Hill Park and elsewhere in Staunton. He suggested the creation and use as a park for the City’s Sears Hill land and it was his idea to call it Woodrow Wilson Park. Charles Catlett also suggested the use of a municipal flag and seal, and his proposed designs were later adopted by the City of Staunton. Catlett served for many years as a trustee of Thornrose Cemetery, on the vestry at Trinity Episcopal Church, and left numerous bequests for the benefit of the Staunton community after his death.

A card left at the local funeral home and later transcribed and saved by a family member, along with many others, noted that the following came from the local African-American school:

“Our hearts sorrow with you. Mr. Charles Catlett was one of nature’s nobleman whose life was rich in unselfish service. There is none too poor to do him reverence. We send our united and sincere condolences.” 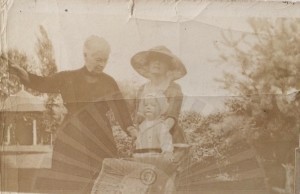 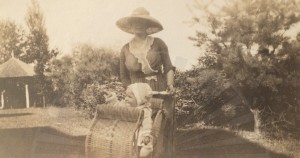 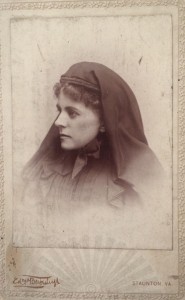 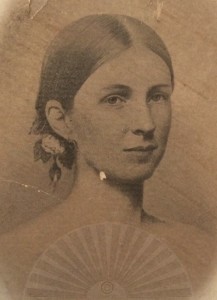