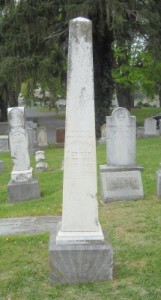 William Madison Peyton was the only surviving child of John Howe Peyton and his first wife, Susanna Smith Madison. He was educated at Staunton Academy, Princeton, and Yale. He married Sarah “Sallie” A. E. Taylor in 1826 and lived in Staunton, Bath County, and for many years at Elmwood (now Elmwood Park) in Roanoke County, Virginia. William Madison Peyton lived in Albemarle County, Virginia from 1862 until his death. His obituary, transcribed below, was published in the Staunton Spectator on February 18, 1868. His brother, John Lewis Peyton, later erected a cenotaph in Thornrose Cemetery in his memory.

Col. Peyton resided at Alta Vista in Albemarle County, but having been called to Abingdon by the death of his son-in-law, Hon. Walter Preston, he was returning home, and while on a visit to his brother-in-law, Mr. Eskridge, he was attacked by paralysis, which proved fatal.

Col. P. was the oldest son of the late John Howe Peyton of Staunton, and he left in our community many near relatives and many attached friends to whom he has been known from his boyhood. He married a daughter of Judge Allen Taylor, Chancellor of the Staunton bar.

He was best known in Virginia in connection with Roanoke County, where he lived for many years, and where he was distinguished as an agriculturist and as an able representative in the Virginia Legislature.

He was a pioneer in the development of the Cannel Coal interests of Western Virginia, where a town and extensive mines yet bear his name. This enterprise led him to remove to New York where he soon became well known as the President of the Old Dominion Society, and as such, the leader of Virginia sentiment in that city. He was in New York when the trouble of 1861 began and gained a high reputation as a writer in opposition to the secession of the South. When, however, contrary to his judgment and advice, secession was attempted and war followed, he left his business and his property in New York and came home to share the fortunes of his native State. He was too old and too infirm to render personal service, but he was accompanied by his only son who gallantly fought throughout the war for a cause in which his father could only suffer and endure.

Col. Peyton was well known in Virginia for his genial hospitality, pleasing address, refined tastes, high attainments, vigorous intellect, and clear integrity. He was a fair representative of that class of Virginia gentleman, whose passing away is one of the greatest misfortunes which threaten to overwhelm us.